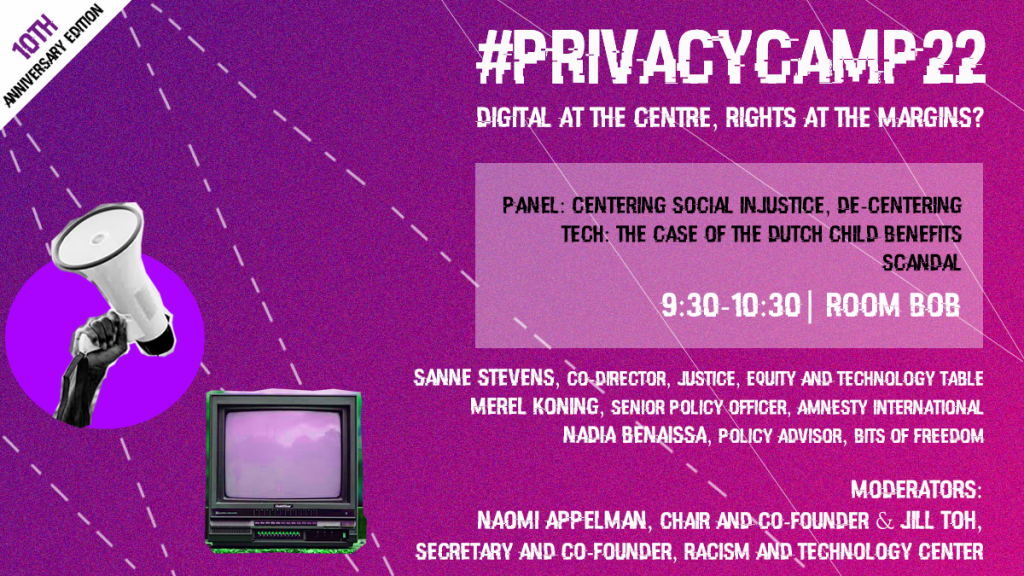 With the increased attention to the potential discriminatory and harmful effects of automated systems, especially in the context of government, comes the tendency to overfocus on the role of tech in systemic injustices. Clearly, critically examining the role of technology and developing the necessary vocabulary to talk about the harms they generate, is of vital importance for holding digitising governments to account. Nevertheless, the historical context of systemic injustice and the concrete harms experienced in this should be the focus point of the debate.

With this session we want to contribute to making the debate on digital rights, specifically in relation to marginalized voices, less technocentric. There is a need for nuance on the question to the driving role technologies play in exacerbating and perpetuating social injustices.

By using a specific case study from the Netherlands, the child benefits scandal, as a starting point, it brings to fore the entanglement of a longer history of racist practices by governments, the increasing use of new technologies such as automated decision-making systems in government agencies, and the (potentially) outsized role/factor of algorithms in these discussions. By engaging with, and prioritising local expertise of anti-racist organisations in the Netherlands, we believe that they can provide a deeper understanding and contextualisation of the concrete harms and social injustices of marginalised groups, specific to their localities. Their vital contributions can help to reconfigure and move the tech-driven harms debate towards wider social justice goals.

This panel brings local anti-racist organisations into the discussion on digital rights first through the concrete case of the Dutch child benefits scandal, then by reflecting on the broader context of digitalisation in the public sector. This will provide greater nuance of articulating and addressing the problems of technology use and social injustice. Panel goalsThe panel aims to bring together local and on-the-ground anti-racist organisations from the Netherlands into conversation with digital rights organisations. The overall objective is to identify concrete harms, as well as to provide nuance to the discussion in de-centring the role of technologies vis-a-vis social injustices. As a concrete outcome of this panel, we hope to identify key considerations to framing and addressing social justice concerns and tech-driven harms, by centering local knowledge and expertise. This includes identifying the areas in which local anti-racist organisations lack capacity, how digital rights organisations can support their efforts, and how these communities can be built and sustained beyond these discussions.

Broadly, how are social justice concerns and tech-driven harms being discussed in the digital rights spheres? How is the discourse of digital rights and technologies shaped? How do they differ from conversations and work in anti-racist organisations? How has the Dutch child benefits scandal been framed and discussed? What are the shortcomings and missing perspectives in these discussions? How does this relate to broader issues on the use of technology in government and its related agencies? How can the perspectives of anti-racist organisations be centred in these discussions? What kind of structures and resources are needed to amplify the voices of local anti-racist organisations and activists to tackle some of these issues caused by the use of technologies? What kind of capacity-building do they need to build sustainable communities, and how can digital rights organisations help with that?

Check out the full programme here.

Registrations are open until 24 January, 2022 here.

Check out #PrivacyCamp22 Sponsorship package & support one of the top European privacy conferences.
Be the first to find out the latest news about Privacy Camp by signing up to the Privacy Camp newsletter.